I loved this news Alyssa was spotted again and again during the filming of "New Year's Eve" the latest Gary Marshall's romantic ensemble drama playing nurse & I must say I really enjoy the new look. She was still look stunning even during her pregnancy and I am truly inspired by her sweetness and everything!I hoped that this movie will be a huge hit. Below are the previews so head over to the gallery for more!

Alyssa Milano may be expecting her first child but she’s busier than ever.

After just wrapping up a guest appearance on Breaking In, the mom-to-be was busy at work in New York City today (March 7) while on the set of the upcoming Garry Marshall comedy New Year’s Eve.

Rocking hospital scrubs and sporting her famous million dollar smile, Alyssa was dressed in character as a nurse and caretaker who spends her time fretting over not having anyone to spend the holiday with.

Before stepping out on set, the 38-year-old beauty posted this pic and tweeted:

Finally Alyssa was on the paparazzi sight again, this time she was caught at LAX Airport departing for the filming of her latest movie "New Year's Eve" in New York and she was looking gorgeous without her usual makeup on. Talk about natural beauty, Alyssa was leaving the airport with her beloved husband and they looked happy together. Below are the previews and head over to the gallery for more!

New Charmed Comic Released: "The Heir Up There"!
Posted on 06 Mar 2011
Posted by Admin

An all new 5 issue story arc starts here! Great jumping on point for new readers. Piper is distraught when she finds that her baby daughter has the same orbing power as her part-Whitelighter aunt Paige and worries that it could put her children at risk again as it did when Wyatt was born. Leo decides to make a visit to the Elders for an explanation and is given an intriguing offer but one that would seriously affect his future with Piper.

Meanwhile Neena has teamed up with a Darklighter as the two set forth on a Whitelighter killing spree in order to absorb their abilities. Now that she has taken control of the Underworld, Neena has set her sights on the Upper Regions and things are about to heat up 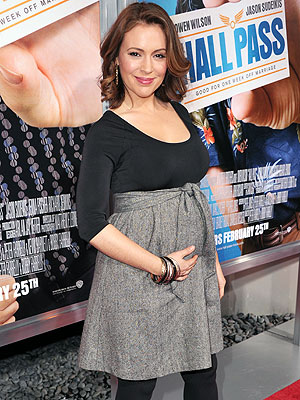 Her first trimester is over — and so far, so good for Alyssa Milano.

“I feel really good,” the actress, 38, told PEOPLE on Wednesday at the premiere of Hall Pass in Los Angeles.

“I’m not sleeping great because of the many trips to the bathroom in the middle of the night. So, I don’t know. I feel good, but if there’s a time I feel like I need to slow down, I will.”

Milano says she and her husband, Dave Bugliari, 32, don’t know the sex of the baby yet, but they’ve been talking about names since “before we even got pregnant.”

They do have a few favorites picked out, but Milano says: “I don’t want to tell!”

The actress says she actually found dressing for the premiere to be easier than usual, because the pressure’s off.

“I’m not as body conscious or concerned with the way I look,” she says. “It’s more about what’s going to be comfortable versus what looks flattering. It’s a whole different world that I’m enjoying a lot.”

She adds with a smile: “A muumuu? Perfect!”

Otherwise, she hasn’t really started preparing for the new baby, but that’s going to change shortly.

“Everyone says don’t do anything the first trimester, because God forbid something happens,” Milano says. “So, I haven’t really done anything. I’m going to New York to do a part in New Year’s Eve, and I’ll be back home in three weeks, so I figure I’ll start then.”

I have a big surprise for you today that I manage to add some of the rarest sets of images & candids to our gallery. True, they are very hard to find but I find all was worthy. Together they are 30+ images have been added today and more will be coming soon. So browse over the gallery for more and below are the very gorgeous previews!

Finally we have the exclusive photos from on the set of Alyssa latest guest role in the new drama "Breaking In". Starring opposite Christian Slater & Bret Harrison, Alyssa looked pretty eager to be back on set working like usual and we are very happy for that. Showing the growing baby bump..Alyssa still look as stunning as ever so here are the previews and head over to the gallery for more!

Home > Television Shows > Others > On The Set: Breaking In
| 0 Comments

Alyssa Milano cast in Fox's 'Breaking In'!
Posted on 02 Mar 2011
Posted by Admin

Alyssa Milano has been cast for a guest appearance on the upcoming Fox comedy “Breaking In.” Actress will play the ex-wife of Christian Slater’s character, Oz, who is the owner of a high-tech security firm.

“Breaking In” will debut at 9:30 p.m. April 6 — with a nice lead-in of “American Idol” — and Milano will appear in the April 13 episode. Depending upon future scripts, she has the potential to be cast in future episodes.

The pilot was shot in March and the remaining episodes are now in production. Adam Sandler’s Happy Madison Prods., Sethsquatch and Sony Pictures Television are behind the project.

Here I presented you our newest version of The Image Gallery & Screencaptures Central with new layouts! These smashing new theme were made by Anne from FanFusion.org and I am so happy with the whole design and loved it so much! I matched the banner with the same photo to use for our main site layout just the color that I decided on the different ones.... Hope all of you will loved these as much as I do!

Meanwhile, Alyssa says her unborn baby is already keeping her up all night.

“I feel really good but I’m not sleeping great because of the many trips to the bathroom in the middle of the night,” she tells People mag. “So, I don’t know. I feel good, but if there’s a time I feel like I need to slow down, I will.”

She adds that choosing what to wear has become easier since falling pregnant.

‘I’m not as body conscious or concerned with the way I look,” she says. “It’s more about what’s going to be comfortable versus what looks flattering. It’s a whole different world that I’m enjoying a lot.”

With her first trimester out of the way, Alyssa says that she is planning to start preparing for the baby soon.

“Everyone says don’t do anything the first trimester, because God forbid something happens,” she says. “So, I haven’t really done anything. I’m going to New York to do a part in New Year’s Eve, and I’ll be back home in three weeks, so I figure I’ll start then.”

Alyssa was caught shopping spree at Nordstram Los Angeles and still spotting her baby bump...she look stunning as always without make-up. Some news reported that the candid was taken during the shot of her recent project New Year's Eve, and still this must be taken right after the Hall Pass premiere in the next morning well...anyway enjoy these images and below are the previews and link!

I have found more images from Hall Pass Los Angeles Premiere and thanks to the original poster at most of celebrity photos forums for finding these gorgeous images for us fans. These are most in HQs but some still in tagged MQs but they are already stunning enough to look at. And I have also added some rare set of images from various outtakes of Alyssa and also some older magazine & press clippings and exclusively uploaded to the gallery for visitors and loyal fans here! Head over to the gallery for more and below are the previews!

Charmed Behind The Scenes Images!
Posted on 25 Feb 2011
Posted by Admin

I just found these lovely set of rare behind the scenes images from Charmed its really rare and I never seen them before and I brought them to you exclusively for visitors of Alyssa Milano Central. I loved these images and Alyssa was cheery in the scenes and made me missed Charmed even more. I will continue to find more rare images from Charmed which exclusive for all fans around here so just stay tuned and watch this space!

Alyssa have received the most attention the night of the premiere of her latest star-studded movie Hall Pass due to her exciting pregnancy news and E!News & CNN had made special coverage on the event and interviewed Alyssa about how she was doing currently and most of it are happy baby news and Alyssa flaunted her new baby bump during the star-studded event looking stunning and glamorous as always. 300+ screen captures have been added from the interview and below are the previews!

I have managed to update our gallery with Alyssa Milano latest appearance at a public event for the premiere of her latest movie Hall Pass at Los Angeles so here are the scoop on her appearance:

It was guest plus one as Alyssa Milano attended the Los Angeles Premiere of Hall Pass at the ArcLight Cinemas Cinerama Dome in Hollywood on Wednesday night (February 23).

Showing off her growing baby bump in a high-waisted wrap skirt, the 38-year-old mom-to-be was on hand for a good laugh as she stepped to support her new big screen comedy.

Following the screening, Alyssa tweeted: “Jason Sudeikis is a movie star. He’s genius. And the beautiful Christina Applegate is wonderful and needless to say, hysterically funny.”

Alyssa is said to be three months along in her pregnancy. She met her husband, Creative Artists Agency agent Dave Bugliari, three years ago in New Jersey and wed in 2009.

Next up? The big screen beauty is slated to appear in the Garry Marshall ensemble comedy New Year’s Eve.

According to the Zenescope & Comic Monsters, the sixth issue of Charmed comic will bring back the memories of Phoebe's deadly premonition during the early season two episode Morality Bites...and in this issue, called "Morality Bites...Back" the preminition that haunted Phoebe resurfaced as she would finally met the guy from her vision..Carl Greene!

Fans of the now canceled WB/CW television show, "CHARMED", will be happy to know that their favorite series about the sisterhood of 3 witches and their fantastic adventures will be continuing this week within the pages of Zenescope's sixth issue of the monthly series. Inside you can check out a 4 page preview of the issue before it hits stores tomorrow. Read on for the skinny!

"Morality Bites... Again.' Almost a decade ago Phoebe Halliwell saw a future in which she was publicly burned at the stake for killing a mortal that murdered her friend. Now as the time approaches for her premonition to play itself out, what can she do, if anything, to stop it? Phoebe questions whether the events are destined to play out the way she saw them or if enough has changed to save both her friend's life as well as her own."